Many organisations are now embracing the use of smartphones and tablets to increase productivity in the workplace, and as more sensitive data goes mobile, your organisation’s security policies must extend to your mobile endpoint devices. Lookout Mobile Endpoint Security makes it easy to get visibility into the entire spectrum of mobile risk, apply policies to measurably reduce that risk, and integrate into your existing security and mobile management solutions.

The success of Lookout’s personal and enterprise mobile endpoint products has given us visibility into over 100 million mobile devices worldwide. This unparalleled visibility into mobile apps, networks, and OS firmware allows us to implement machine learning to detect emerging threats with high fidelity. 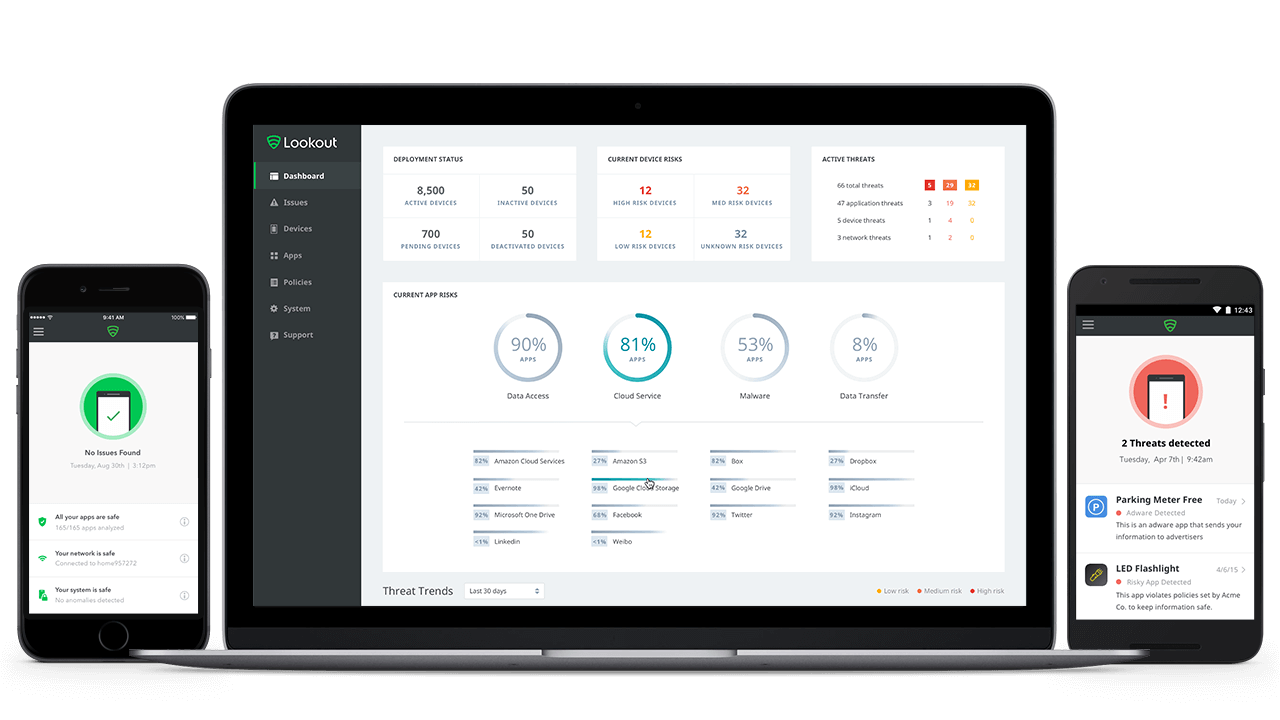 Apps are the predominant way that sensitive data is accessed on mobile devices, with risks spanning across both iOS and Android. Lookout’s app analysis technology is powered by intelligence from over 40 million iOS and Android apps, giving you visibility into app-based risks such as:

Phishing is the most common way attackers lure users to malicious websites to deliver drive-by downloads or inject code onto a device. The mobile device opens up new routes attackers can use to gain access to users’ credentials beyond corporate email.

Lookout alerts users to phishing attempts from any source on a mobile device including:

If the device is compromised with software vulnerabilities, the built-in security of the operating system can be bypassed. Lookout creates a fingerprint of each mobile device and compares it against the 100 million devices in our security platform to identify anomalies and risks, such as:

Often taking the form of a man-in-the-middle attack, these network threats are typically executed by spoofing a Wi-Fi hotspot to intercept network traffic and decrypt sensitive data. By analysing network connections from our global sensor network, we effectively mitigate false positives while detecting high impact threats, including:

FIND OUT HOW LOOKOUT WILL BENEFIT YOUR BUSINESS

Contact AJP Solutions, today, to find out how we can improve your business' network solutions. AJP Solutions is dedicated to providing a quick response to any enquiries we receive.
CONTACT AJP SOLUTIONS, TODAY!